One of the most under-appreciated movies from the 80's was a sci-fi comedy called "Short Circuit" It tells the story of a robot named Number 5 who becomes sentient and tries to escape the big bad government agency that wants to weaponize him. It's a great movie, especially if you enjoy robots being reprogrammed to act like the 3 Stooges. The movie ends happily with the robot re-naming himself Johnny 5.

Why am I even mentioning this cinematic masterpiece? Because another Johnny, from Johnny's Trading Spot, is holding a weekly series of Big Fun Games. He's streamlined the process, keeping the participant numbers low and allowing the game to complete relatively quickly.

I was a lucky member of the first group, a small group of only 5 people. When the order was set, I was sitting at choice #2. If you've ever played one of these games before, being that low isn't really advantageous, as I only get to see one of the gifts to potentially steal, and pretty much everyone else has a chance to take my prize if it turned out to be something good.

After the first prize was revealed, I instantly knew it wasn't worth using my lone steal on, so I had to pick from one of the remaining 4 prizes. I chose #5 (Get it now? Johnny 5! Synergy!). As it were, I was very pleased with my choice, a selection of baseball Hall of Famers:

Those are some sweet cards, and I'm glad no one stole them from me! Johnny also included a surprise card! 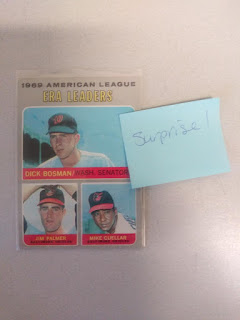 Modern cards of Hall of Famers is one thing, but a vintage card with one of the all-time great pitchers in baseball? Surprised indeed!

Thanks for the BFG and the cards, Johnny!
Posted by Matt at 10:00 AM