1971 Topps has a special place in my heart. When I was in middle school, my uncle gave me the task of sorting a bunch of his baseball cards from the seventies. The deal was that I could keep any doubles he had, triples were his, quadruples mine, etc. I remember just sitting on the floor, enjoying the whole process as I checked out each and every card. It was my first real introduction to cards created before I was born. I ended up with almost 40% of this set, along with about a quarter of the 1970 and 1972 sets. Since most of my new additions came from that 1971 set, that's the set I think of most when recalling that day.

Needless to say, I'm excited that this year's Heritage features those distinctive black borders. I picked up a pack as soon as I could. Let's see what thoughts run though my mind as I opened this throwback to happy memories: 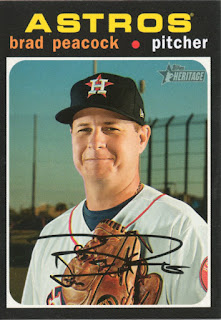 The honor of the first card goes to Astro's pitcher Brad Peacock. I know some people will comb over ever detail - the fonts, the backgrounds, the back - comparing it to the original and pointing out the slightest discrepancy. Not me. As long as the card captures the spirit of the 1971 set, I'm happy. These look good. The black borders provide a nice contrast with the framed picture within. 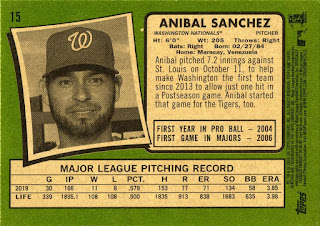 Here's a look at the back. Note to Topps - bring back the big disembodied heads, and I'll gladly accept truncated stats on the back! I love the trivia on this particular card too! 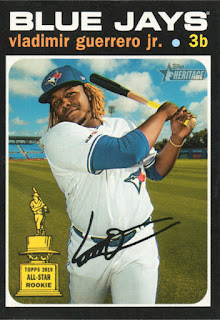 Boom! Short print of Junior Vlad, complete with the awesome vintage rookie cup! I'm glad this was the short print I pulled, but it remains yet another reminder why I won't buy a lot of Heritage. Having 1/5 of the set short printed is madness! I pity the poor soul that tries to finish Heritage sets. 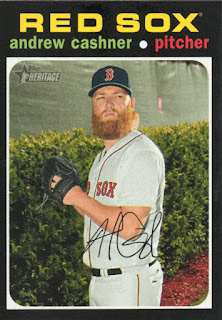 The first Red Sox card from this set goes to a guy who spent the latter half of last season with them, and is no longer on the team. Then again, as of this writing, he is still a free agent and Boston could use an innings-eating starter! (Besides, the Red Sox should employ more redheads on the team. They just look sharp in the uniforms!) 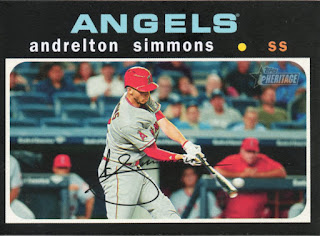 The lone horizontal card in the pack, it's not exactly a photo that lends itself for a good horizontal shot. Too much wasted space on either side of the batter.

A couple of things that struck me as I was leafing through. First of all - no inserts! I'll gladly take the short print over any of those, but it was just weird having the full pack be just base cards. Also missing: the standardized rookie card logo! Topps shoves so many rookies down our throat that I was expecting to see that little RC at least once, but no! Could this be intentional to make the cards more realistic? Maybe... I looked at some of the Rookie Combo cards in the set - even they lack the logo! Bravo Topps!

So far on the retail front, I prefer these over the base set. Donruss and Opening Day come up next, and I'm not overly intrigued by either. (Have you seen those emoji parallels Donruss is throwing up? Good grief!) Even though I won't even try to complete this set, I see myself buying more Heritage  over the base set. Then again, my local Wally World still has a lot of Clearance and last year's product on the shelves. Maybe discounted cards is the way to go, at least until Gypsy Queen comes out.
Posted by Matt at 10:00 AM