Last week, I showed off a group break I participated in that was hosted by Chris over at Nachos Grande. I mentioned at the end of the post I joined a second group break last September, this time for a box of 2003 Playoff Prestige. With this group break, participants were randomly assigned a second team. I ended up with the Cleveland Indians, which I was fine with. My first ever MLB game was in Cleveland, so I have a soft spot for that team.
Just as he did before, Chris had some extra packs he opened as bonus content. 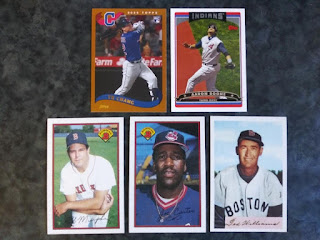 Aaron Friggin' Boone, are you kidding me? At least the Ted Williams reprint is sweet.
The Prestige box was the main attraction. It's a good looking set - simple, but the dual photography is nicely done. I ended up with some good cards. 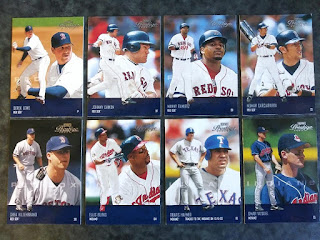 Over half of the Red Sox team set, former Sox favorite Ellis Burks, plus a couple of "Hall of Very Good" level players - not too shabby!
The Prestige box turned out to be one of the better boxes Chris has ever opened, with a bunch of relics, more than what a regular box would expect. I didn't get any of those hits, but I did come away with a serial numbered insert. 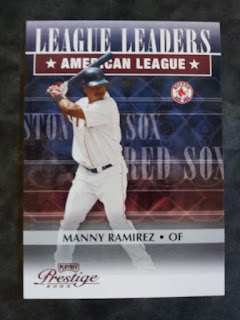 The League Leaders set is numbered to 2002. It's funny to be reminded of the fact that although he was known for his power, he led the AL in batting that year!
Favorite Card: Manny hits his way to the lead!
Thanks again, Chris!
Posted by Matt at 10:00 AM