Billy from Cardboard History continues to brings the goods! I'm down to the final two packs, so let's try and get this set knocked out before hockey season starts up again!

This pack contained 56 cards, mostly from the 92-93 Fleer Ultra set 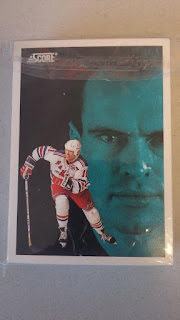 That blue shading doesn't look right. It make him look like Yondu or one of the Avatar aliens. Here are the highlights of the stack:


One of the small amusements you can get from a Fleer Ultra set is looking for cards where the photograph matches with the Ultra logo. You can find a few baseballs in the baseball Ultra sets that look like they are being thrown/batted by the subject matter. This was the best hockey equivalent I could find in the pack. Keane sees the flaming puck coming towards him, and looks like he might just take a whack at it.


An Eric Lindros rookie! Not bad, not bad at all! OK, so maybe it isn't his true rookie, but still...


I don't care what logic you throw at me - no goal! Stinking Hull...


Many a human being fell to their knees and wept at the sight of this mullet of pure beauty.  Hatcher surely had his fair share of groupies...


We'll wrap up this pack with a man flying over the ice rink. I feel sorry for the hockey player behind him getting the full force of those sharpened skates!

My collection of hockey cards continues to grow from just a smattering of random cardboard to something worthy of being called a collection. Thank as always Billy! (And if anyone out there is still not soaking up the wealth of knowledge Billy shares on his blog, then you really need to click over there next: Cardboard History)