Someone Stole My Cards, But It's All Good!

It's hard to get upset over cards that you technically never had in your possession, especially when you pilfered them from someone else in the first place. Johnny from the blog Johnny's Trading Spot gave away some cards as part of a "Big Fun Game" If you're unfamiliar with these games, they're played like a Chinese Auction. Players are assigned a picking order, and the person who goes first picks a random number. The prize is revealed, and Player #2 has the choice of stealing a revealed prize or picking a new number. Play continues until everyone everyone has a prize. Often there's a limit on how many times a prize can be stolen.

As you can guess, I was a willing and grateful participant. There were 24 players in all, and 29 prizes. I was ceded at spot #14 - a good spot, as it allowed me to see a decent number of prizes. When my turn came, I decided to steal one of the previously revealed prizes - a lot of rookie cards. (It was hard to pass up a Pedro!)

Alas it was not to be. That lot of rookies was in turn stolen from me. Most other times that I've played this game, if your prize is stolen then you immediate get your turn to pick a new prize or steal something else. However, Johnny changed things up a bit. Instead of picking next, you got to be a part of a second round that included any unclaimed prizes.

Round 2 came, and since I used up my one chance to steal, I had to pick a number. I decided to follow the old Topps rule of good cards end in "0" and picked #20.  That turned out well:


34 Vintage cards from the 60's! Granted, they're not in the best shape. All but one had writing on it. I think it gives them some personality! I was quite happy with it, as I didn't have many cards from before 1970 to begin with. (Actually, my total was only at 6, not counting the cards in my Time Travel Trade stack of course!)

Johnny even threw in some guy named Mantle: 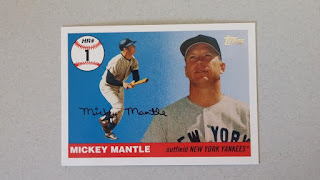 That one may not be vintage, but it sure does have the look! Thanks again Johnny for the cards! Your BFG was truly big and fun!