You gotta love pure irony! I had this post written for awhile, awaiting a needed filler day to pop it into. I decided last month to go ahead and get it all set and scheduled to go for today, and now we're mere days removed from the start of Mookie's Dodger days. I'll be honest, I'm not sure where to take this series from here. Do I silently suffer and continue to connect the former Boston star? Do I reboot the series with someone else? 6 Degrees of Verdugo doesn't quite have that same ring, you know? 6 Degrees of Raffy perhaps? 6 Degrees of Bogaerts? I'm genuinely curious about what my reader think here. Let me know. In the meantime, I've got one (maybe) last one to share...

It's time once again for "6 Degrees Of Mookie" - the fabulous game show blog post where I take a random card in my collection and attempt to connect it to FORMER  Red Sox superstar Mookie Betts! Let's take a look at today's contestant! 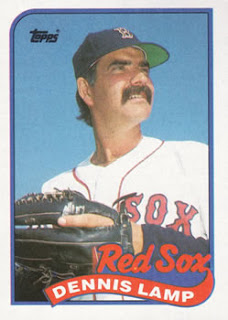 Here's a first! I have the complex task of connecting one Red Sox player to another. However will I manage this? Lamp pitched from 1977 to 1992 for 6 different teams. He has the distinction of not only giving up Rod Carew's 3,000th hit, but also Cal Ripken Jr's 1st!


Full disclaimer: I've used the Ellis Burks to David Ortiz to Mookie Betts chain before. The fact Burks started his career with the Red Sox in the 80's and later returned for his last season in 2004 makes him the go-to guy for any junk wax era guys. I'll at least try to use different cards than before.


As I stated, Ellis finished off his career in 2004. Injuries limited him to only 11 games that season but he was so respected as a clubhouse leader that he was given the honor of carrying the World Series trophy off the plane when it arrived in Boston.


Ortiz may have retired in 2016, but it's fun to show off a set featuring both from the current year. Especially when you have that great Stadium Club photography!