Spur Of The Moment Thoughts On The Trade 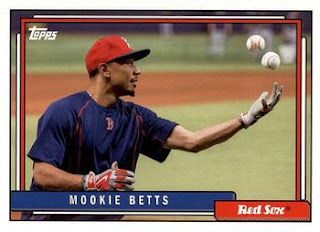 Can't wait to read Night Owl's post on this...

Red Sox fans knew this day was coming, and the team finally ripped the bandage off, trading stars Mookie Betts and David Price to the Dodgers. Here's what I'm thinking as I watch the MLB Network dissect this:

As a fan of Mookie, this sucks. One of the wealthiest sports franchises traded away one of the Top 5 best players in the game today. That just shouldn't happen.

That being said, I get it. Mookie is going to free agency and getting top dollar after the season, and repeatedly declined extension offers. The Red Sox were either going to get something in a trade or a compensation draft pick after he left.

I'd rather have Alex Verdugo than that sandwich pick, so I'm glad he's coming to Boston. He'll never be on Mookie's level, but he's a solid young player who has a lot of potential. He could do well at Fenway..

The Involvement of the Twins was a surprise. I know nothing about this Brusdar Graterol prospect we go from them, so I'm going to hope our GM did his homework and got a guy who will make this trade  sting less a few years from now.

I think Mookie is going to have one of his best seasons and set himself up nicely for a big contract. I'm already dreading the Yankees will make a push.

I'm flat out amazed the Dodgers pulled this off without giving up any prospects. They get a stacked ball club and keep their top level farm system? Yikes.

It's done. Spring Traing starts soon, and the Red Sox still need a manager and now another starter. It's going to be a long Spring.