Still Jolly About The Holly, Part 2

Happy Saint Valentine's Day! A day where our thoughts are focused on roses and chocolates, love and romance. At least until tomorrow, when the stores start displaying green shamrocks and leprechauns.

Me, I'm still thinking about Christmas. Not about Christmas so much, but rather the 2019 Topps Holiday set. I bought enough of the product to the point where I was close to completing it, and I knew if I didn't complete it soon, it'd join the rest of the season in the back of my brain, never to be thought of again. I decided to try hard and get the cards I needed through trades, and with the help of 2 generous bloggers and a few willing TCDB trade partners, I am happy to say this set is done!

When we last left off, I had only needed more 31 cards to complete the base set. I've already spoken about the generous act of kindness from Johnny as well as a trade from Christian. These two left me at having 18 more to go, so I decided to hop onto TCDB and see what trades I could make. I ended up making 3 more trades:

The first envelope to arrive came from Tom, who I've traded with before. This time I helped him with his 2018 Topps set build, and in return he knocked my want list in half! 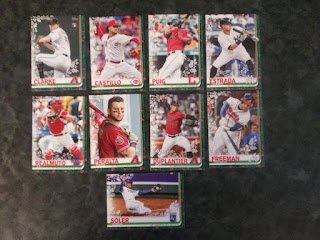 While I was waiting for the other trade packages to arrive, I received a surprise envelope from Jon (A Penny Sleeve For Your Thoughts). Jon organized this year's Secret Santa, and humorously enough, I was the lucky soul who ended up being his Santa! In the years I've done this, I always thought it would be cool to give my recipient a pack or two to open. So when I bought my first two boxes of Topps Holiday, I purposely held a pack from each in reserve to send to Jon. Well, it turns out the packs I sent Jon were chock full of ones I would eventually need, so Jon kindly sent them back! (Is that considered re-gifting? ) As you can see, there's some overlap with what I got from Tom (and what I was expecting as well). Oh well! 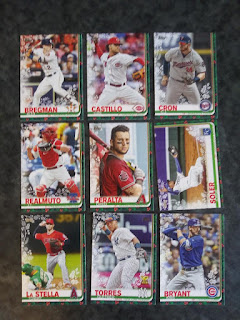 Next stop on the road to set completion - a trade courtesy of Dave from Wintersville, OH. I had a bunch of cards on his want list, and was able to acquire a few more cards from this set, along with a few Red Sox needs to boot! 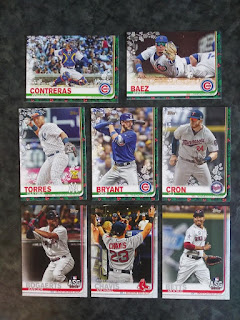 That left me with just 3 cards left to go! That last trio of cards (along with a few others!) came from a prominent TCDB member - Jerry from New Windsor, NY! 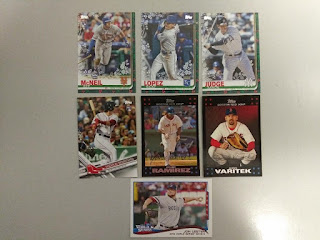 Boom! I now have the complete 2019 Topps Holiday set! This is pretty significant for me, as it's the first modern set I've completed since returning to the hobby a few years ago. (To put it in perspective, my next oldest complete set is 1991 Donruss!) I gotta say, it feels good!

Anyone else working on this set? I've got plenty of doubles if anyone needs any!
Posted by Matt at 10:00 AM