This Former ERA Champ Did Something Amazing!

With the suspension of sports during this pandemic, a lot of professional athletes have extra time on their hands. Apparently some of them are using that free time to answer a backlog of fan mail.

In March of 2017, I bought a pack of Topps Series 1 and decided that I would send off every card in it to the player and ask for an autograph. I quickly got a response from Brewers pitcher Junior Guerra, as well as a "Return To Sender" from another player. A promising young outfielder responded during the off season, as well as a former award winner the following Spring. I figured that was all I could reasonably expect to get back.

3 years, 2 months, and 6 days after I mailed out those card, I received a PWE addressed to me in my own handwriting. Inside, tucked between some index cards, was my fourth successful return: 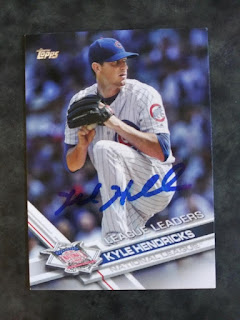 Kyle Hendricks had a magical 2016 season. Not only did he lead the National League in ERA (and ERA+ for you advanced stat-heads), he was a key contributor to the Cubs' epic World Championship. He finished behind winner Max Scherzer and teammate Jon Lester for the Cy Young that year.

I must say it was quite thrilling to get this after so long. It's good to see some players are still bringing joy to us fans, even if some patience is needed!