You Broke My Heart, But I Still Can't Quit You

They say you never quite get over your first love. The same also applies to your sports heroes apparently.

The year was 1986. I was in middle school, and rediscovering the game of baseball. I didn't really have a team then. Growing up in Western New York, there were of course Yankee fans, but geographically we were closer to Cleveland and Pittsburgh than "The City" so there were a healthy dose of Indians and Pirates fans as well.

A part of me wanted to be different. As it just so happens, a young fireballer was having a season for the ages. 14 straight wins, a mind boggling 20 strikeouts in one game - Roger Clemens was on his way to both a Cy Young and MVP season. He was the guy I latched onto, and because of him the Red Sox became my team.

His posters graced my wall. The only Starting Lineup I ever had was The Rocket. (Still have it too! A little yellowed in the uniform, but still in one piece!) One of the great accomplishments in my young collecting days was owning not one, not two, but three different versions of rookie card! (Topps, Fleer, and Leaf if you're curious.) I even got to see him pitch - my dad took me to a game in Cleveland in 1990. He won his 20th game that day, the last time he won 20 with the Red Sox.

Those last four years in Boston were not at the same level as the seven before them. The number of wins, the strikeouts - everything was down. Still, he was my guy. In his free agent year, he bounced back again to lead the league in strikeouts and even struck out 20 guys again. In my naivety I thought maybe the Red Sox would still bring him back. He went to Toronto instead. I was disappointed, and tried to justify Boston's decision by looking at those last few years, but disappointed nonetheless.

He had moved on, and I tried to be happy for him. He bounced back and won the Cy Young award again the next two years as a Blue Jay. part of me was ecstatic the old Roger was back, but also saddened it was with another team.

Then came the ultimate heart rip. Roger moved on again, and he ended up with the worst possible team. The Rocket became a Yankee. What really hurt was not only was he a Yankee, but he thrived in New York. He won another Cy Young, and helped those damn Yankees to 2 more insufferable World Championships.

That wasn't even the low point. The Mitchell Report came out and basically stated that Roger's post-Boston career was chemically enhanced. Other shady stuff has surfaced as well, bringing his whole character into question.

Roger stopped being "my guy" a long time ago. The roller coaster he put me through as a fan still reverberates today. Even now, I have trouble labeling any current Red Sox player as "my favorite" for fear of disappointment down the road. I'll even admit I'm mildly jealous of guys like Fuji, whose Tony Gwynn fandom has no scars of another team or questionable ethics.

And yet, seeing a card of Clemens with the Red Sox still pulls at me. That was the case recently as Rod from Padrographs was giving away cards like it was Christmas. The moment I saw it, it called to me. Sitting there, oh so pretty, ready to break my heart again: 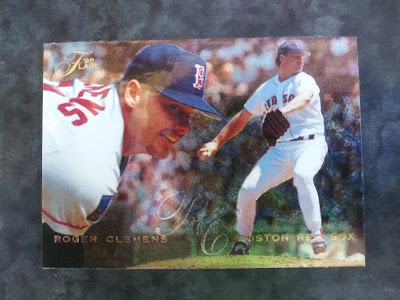 Damn you, Roger. I just can't quit you.

Thanks for the card as always Rod! Your generosity is beyond parallel!


It's Friday, which means it time for another one of Johnny's BFG! (i get to play this week!) He still needs 7 more people to play later this month! Surely there are 7 readers who want to spend a little bit of their Friday night to score free cards, right? Sign up now!
Posted by Matt at 10:00 AM