Johnny's BFG Goes To The Movies!

That doesn't make a lot of sense, but it's true. I like Stephen King, and have read dozens of his books, but I really haven't had much interest in the recent string of film adaptations that have been based off those books.

I like Stranger Things, and was a regular viewer of The Walking Dead right up until my local cable provider ditched AMC (which was probably a good thing, as Glen's dumpster death was a "jump the shark" moment for me.) In both those instances, the story kept me watching more than the horror aspect of it.

When it comes to movies, it's basically the same thing. I need more than just gore. I'm not interested in being grossed out, and think jump scares are weak. I'm more likely to watch a horror movie for it's comedic elements (Army Of Darkness is a particular favorite.) or if it's more along the lines of a sci-fi movie (The Thing, Aliens, etc.)

Despite my feelings on the genre, I can still appreciate the satire that went into my latest winnings from Johnny's Trading Spot. No sports cards this time around, I picked a unclaimed number and came back with this 10-card run of horror cards from 2018 Wacky Packages Goes To The Movies: 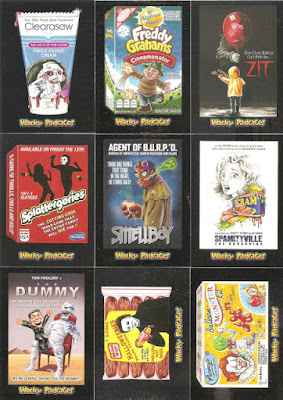 I even got one of Johnny's coveted raffle tickets! 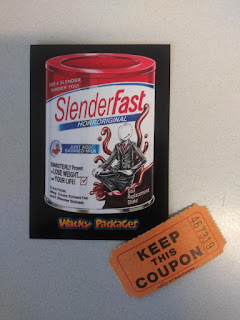 To be honest, these don't really fit into my collection, so I'm more than willing to trade these away if someone would like them. Feel free to make an offer!

Favorite Card: The board game fan in me was tempted to pick the Splattergories card, but the semi-cuteness of the Freddy Grahams wins the day!

Sign-ups for June are available now! Head over and let Johnny know if you're interested in playing!

As always, thanks for the cards Johnny!