Have you ever tried to complete a set, not so much because you're a fan of that set, but more because you had so much of it you figured you might as well just do it?

Mind you, I don't hate the set. I don't loathe the gray pinstripes to the level that many collectors do. It's just an OK set for me. Yet, in my youth I ended up opening boxes of the stuff. I was probably trying to get my hands on a Griffey rookie like everyone else. When it was all said and done, it was one of those sets I had most of, but never fought to complete.

When got back into collecting and entering my cards in the TCDB, '89 Fleer stood among the sets listed as "almost complete". Over the years a few stray cards found their way into my collection, and eventually the cards left grew smaller and smaller.

I was on the TCDB looking to make some trades, and came across Rencher from Atlanta. As I was looking for what I wanted in return, I checked my So Close page and saw I only needed 18 more cards from this set. Rencher had 10 of them: 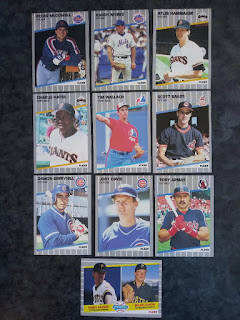 I'm now 8 cards away from completing the set. I might actually get around to completing this before the year is out. Of course, I would need two of the more famous cards from the set - a Randy Johnson rookie card and a Billy Ripken. (Honestly, for set completion purposes, I don't care which of the multiple variations each card has that I end up with. I will admit I'd like to acquire an unedited version of the Ripken somewhere down the line, but again, not necessarily for the set.)

Favorite Card: Probably Wallach, since he's the only action shot here. Plus those red Expos jerseys are might fine!

Thanks for the trade Rencher!