You wouldn't have known from reading my blogs, but I took some time off this month. I had some minor nasal surgery on the 1st. Since I hadn't used any vacation time this year, I decided to just take some time and enjoy life at home as I recovered. Part of my little break was also going to be from blogging, since I wasn't sure how up to it I'd feel post surgery. Fortunately, I had enough posts ready to publish ahead of time, and really only missed Labor Day on my usual M-W-F schedule.

It was almost perfect, except for the part where I realized Wednesday's haiku was the last thing I had  scheduled. So I apologize in advance if the next few posts are a little sloppy, as I'm trying to whip up some short tributes to a couple of deceased legends, another Time Travel update, and new haiku for next week.

Anyway, on to the subject of today's post. Like a lot of people who rely on Wal-Mart and Target to get new product, the shelves have been bare for most of the summer and there hasn't been much of anything. (I went to Target a few days ago for the first time in months, and the only baseball cards they had were Angels team sets...from 2016!) Needless to say, I've been trying to get at least the Red Sox cards from Topps Series 2 via the trade route, and managed to pick up 4 of them from a TCDB named JD. 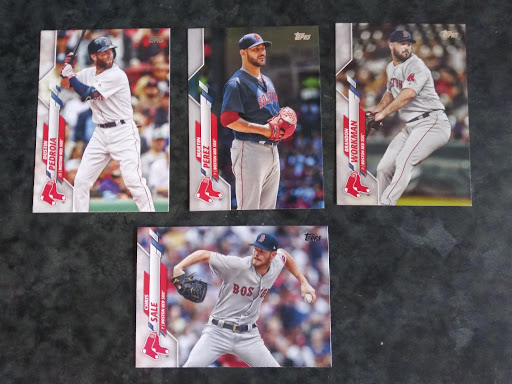 It makes me sad to say this, but Topps needs to stop putting Pedroia in the base set. He's played 9 games since 2018. He's done, although I still hope he gets one last chance next year.

I also picked up a couple of cards from Terry in Eagle, MI. My trade with Terry was actually a Time Travel Trade, which I'll get to sometime in the near future. Outside of that I picked up two more cards: 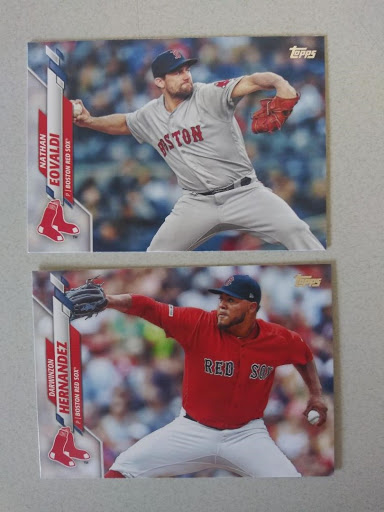 I really like how these two cards look next to each other! Although each pitcher is facing a different direction, you have a straight arm on the left and a bent arm on the right. Eovaldi is wearing the road grays while Hernandez gets the more colorful home reds. Just a lot of similarities and contrasts between the two!

Thanks for the cards JD and Terry!