Two weeks ago, we lost an all-time great. Tom Seaver passed away at the age of 75. Seaver was one of those players that I learned early in my collecting career was one of the best, but was on the back end of his career in the mid-eighties. I knew him from the Red Sox and White Sox more than the Mets and Reds.

In honor of his life and career, I present the top 5 Tom Seaver cards in my collection: 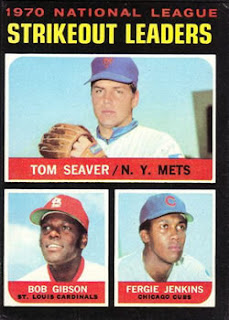 The oldest card in my collection, and the one I feel best summarized Seaver. According, to TCDB, I have 24 cards of Tom Seaver. 25% of them are League Leader cards. I have him gracing cards for strikeouts, ERA, and wins - the triple crown of 1960's and 70's pitching categories. He lead his league 5 times in strikeouts, and 3 times each for the other two. 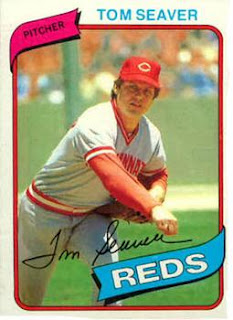 I said before I was more familiar with him with Chicago and Boston, but I also had my fair share of his Cincinati days. I actually miss when Topps would give the rounded hundred numbers to all-time greats (usually) and all-star caliber guys with the tens. Seaver undoubtedly earned #500 in this set. 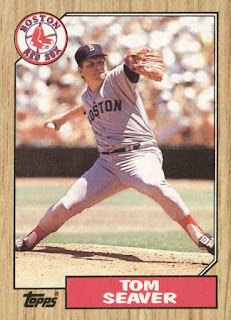 Of course, I'd be doing myself a disfavor if I didn't  show off at least one card of Seaver on my favorite team. This sunset card reflects his last season, spent partially with the Red Sox after a mid-season trade. He was still a serviceable pitcher, but unfortunately got hurt before the 1986 playoffs. I can't help but wonder if he would have made a difference in that World Series if he was healthy. 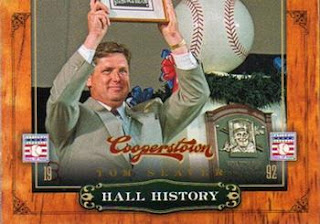 It seems so long ago now, but there was a time Tom Terrific was the standard for Hall of Fame vote percentage. His inclusion on 98.8% of the ballots was a high water mark that stood until Ken Griffey Jr surpassed him in 2016. He's now 4th highest behind Rivera, Jeter, and Griffey. 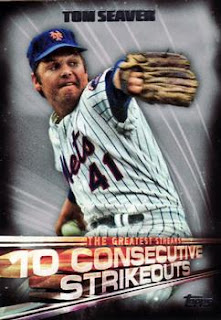 10 consecutive strikeouts is impressive, but the story of the game makes this even more remarkable. Overall he struck out 19, giving up two hits. You want an example of pure pitching domination? Those 10 straight strikeouts came during the last 10 outs of the game! Think about that - starting with the last out of the 6th inning, he recorded the final three frames all via strikeout. I can't imagine what the opposing team (Padres) were thinking as they helplessly tried to do something, anything, against Seaver.

Rest in peace, Mr. Seaver. You will be missed!