Prizes Dropped From The Third Floor

Brendan from The View From The Third Floor recently held a month long contest where each day contestants could guess which 9 players fills up his team page (or in the case of the Padres, Phillies and Yankees, more than 9). What kept it interesting is that it wasn't always the 9 best players, and there were a few times I was sure someone just had to be there and ended up not. Through dumb luck and the consistency of playing almost every day, I managed to take 2nd place. For my efforts, I was generously given a PWE of 15 cards: 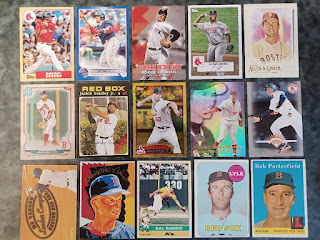 So, let's talk about that Sparky Lyle card, shall we? Readers of my blog know that July had quite a few posts dedicated to Sparky, all because of a contest being held by Daniel at It's Like Having My Own Card Shop.  I didn't win that contest, but Brendan did. That's right, from Daniel to Brendan to me! It was completely unexpected, and brought a big smile to my face when I saw it.
Favorite Card: Sparky by default, but a Red Sox card from 1958 is awesome too!
Thanks for the cards Brendan!
Oh, just a heads up: This isn't the last you'll see of that Sparky rookie card. The saga continues...
Posted by Matt at 10:00 AM