My Top 5 Hall of Fame Series concludes with Ivan Rodriguez. "Pudge" is arguably the greatest defensive catcher ever, winning 13 Gold Gloves. He was no slouch with the bat, also winning 7 Silver Slugger awards. His MVP in 1999 is a bit of a sore spot with us Red Sox fans, but that's not Ivan's fault. (Stupid biased New York city writers...) Still, you can't argue he wasn't one of the Top 3 catchers of all time!

My collection of Pudge stands at 20, with his Rangers days being in my realm of collecting youth. Here are my Top 5: 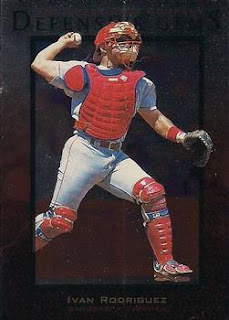 In hand, I don't like theses cards. The reflective coating damages way too easily. Going just by the scans however, the Defensive Gems in this set really stand out. The picture of Pudge looks like it's coming off the card in this scan. I love the contrast. 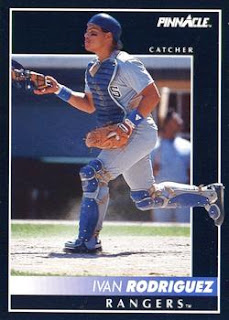 This set from Pinnacle does a good job of framing the pictures. I like how only part of the background is used, and the black border to make it really stand out. I prefer my cards of catchers to show them in gear. I couldn't pass up including his rookie card though. Have you seen him lately? The dude does not age! 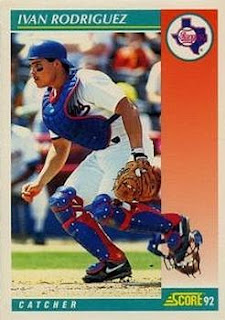 His eyes facing forward, I'm thinking this shot was taken just after a throw to second to catch a thief. Chances are good he got the out. 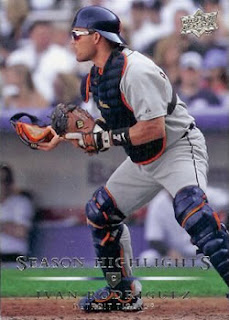 So far every card I've shown has each Hall of Famer with just one team. Bagwell only played with the Atros, and Raines was an iconic figure in Montreal. Rodriguez was known mainly during his days in Texas, but he played for a lot of teams, and most of the time he played very well. We'll close out the list with him as a Tiger.

Ivan Rodriguez was an easy choice for a first ballot Hall of Famer. Congrats, Ivan!
Posted by Matt at 11:04 AM