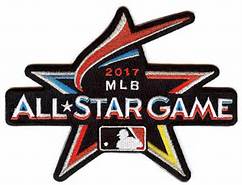 When you think about collegiate summer baseball leagues, most people think of the Cape Cod league, which is the gold standard and often showcases a lot of future MLB talent. When I moved down to Virginia 12 years ago, I was introduced to the Shenandoah Valley Baseball League. I don't get to watch as many games as I'd like, but I enjoy seeing the success many of them have as they move on to the Majors. As of this writing, there are 25 VBL alumni who have played a game this year. Three of them have recently been elected to play in tonight's MLB All-Star game. I'm going to write about each of these players, and showcase what limited cards of theirs I have. First up is Oakland A's first baseman Yonder Alonso:

Yonder played for the Luray Wranglers in the summer of 2006. At the time, he was a coming off his freshman year at the University of Miami, and an appearance in the College World Series. Yonder made his MLB debut with the Cincinati Reds in 2010. He will be represent the Oakland Athletics as their sole representative. This is his first All-Star selection.

Chris Devenski played for the Woodstock River Bandits in 2011. Chris made his Major League debut last year, and has become an indispensable member of the Houston Astro's bullpen. He was selected to his first All-Star game this year as a replacement for a starter who pitched Sunday and could not participate.


As a 3 time All-Star, a Silver Slugger, and  the 2015 NLCS MVP, Daniel Murphy has had the most decorated career thus far among current Valley League Alums. Like Yonder Alonso, he also played for the Luray Wranglers. Daniel actually spent two summers playing down here, in 2004 and 2005. Daniel started his Major League career with the New York Mets in 2008. His career took off with his first All-Star selection in 2014, and his MVP performance in the 2015 NLCS made him one of the most sought after free agents from that off-season. He will be the starting second baseman for the NL squad this year, representing the Washington Nationals.

Congrats to these 3 VBL Alums! I'll be rooting for each of you!
Posted by Matt at 5:09 PM