Continuing with my Hall of Fame Top 5, it's time to show off my favorites of new Hall of Famer Tim Raines.

Back when I was collecting as a kid, you knew who the good players were because your cards told you so. Guys with a lot of All Star cards, guys near the top of statistical leader boards - these were good players, and the one who seemed to be on more of these cards were the great ones. Tim Raines is one of those players. I never saw him play on TV during his prime, but every time I saw the league leader in steals, it was always him and Rickey. He was one of the greats in my eyes, and it astounded me that it took so long for him to get his due.

Since he played mostly during my colecting hey-day, I have 47 different cards of Tim Raines, mostly from his days as an Expo. That puts him at #32 on my player collections, without even trying. Picking my 5 favorites was a lot more difficult than it was with Bagwell. Still, here's what I came up with: 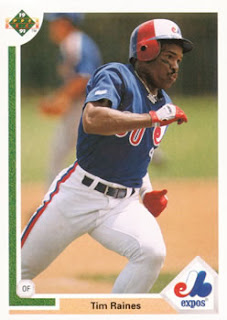 When you think of Raines, you think of speed. The man could run with the best of them, and this picture shows him doing what he does best! Every now and the, A company chooses a border that meshes well with a particular teams set of colors. I can't think of a better example than Fleer's red, white and blue stripes with the Montreal Expos. 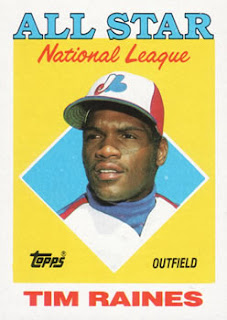 I've always liked the All Star cards from this set. They remind me of the kind of cards you'd see in the 50's and 60's. The yellow may be a bit much, but the head coming out of a diamond is quality design. 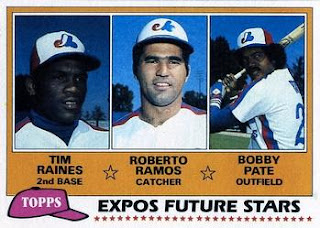 Do you think Roberto Ramos or Bobby Pate ever brag about how valuable their rookie card is worth? 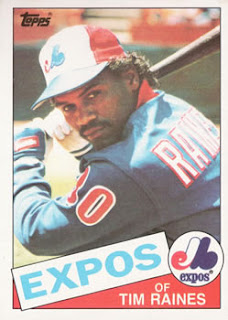 As far as posed shots go, this one is pretty good. Well cropped, and the look in his eyes mean business!

Tim Raines, your entry to the Hall of Fame was worth the wait! Congratulations!
Posted by Matt at 12:57 PM