It's Hall of Fame Induction Weekend! On July 30th, the Hall will welcome 5 new inductees, 3 players and 2 executives. As my personal way of marking the occasion, I'm going to do a Top 5 list of each player, choosing my 5 favorites among my collection. First up is Jeff Bagwell.

Jeff Bagwell remains the great "What If" of Red Sox baseball. He was a 3rd base prospect who did not hit for much power in Boston's system. Blocked by two-time All-Star Scott Cooper, he was traded to the Houston Astros for reliever Larry Andersen. Andersen pitched well and helped the Red Sox to a division title, but did little after that. Houston moved Jeff to first, adjusted his swing, and got 15 years of Hall of Fame production. It's regarded as one of the most lopsided trades in baseball history.

Despite the sting of what could have been, I was happy for his success and enjoyed the few occasions on TV when I got to watch him.

As of today, I have 18 different cards of Jeff Bagwell, mostly from his younger years. A large chunk of his career happened when I wasn't collecting. Still, it wasn't difficult to choose my five favorites. My choices for Top 5 are listed in card numerical order: 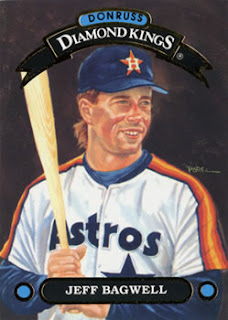 I've always liked Diamond Kings, and the set from 1992 is one of the better ones. The artwork here is excellent! 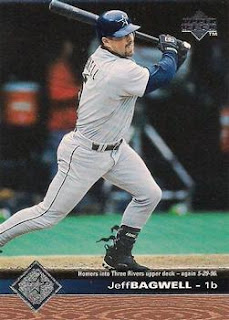 A good shot of Bagwell's follow-through. You can tell he generated a lot of power from his legs. This set would have been much better if they toned down the foil. The wood-grain foil was too much. 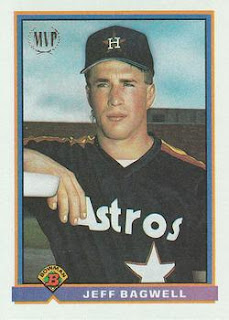 I didn't realize I had a rookie card of his until I looked up my collection on TCDB. It's a pleasant surprise. I'll have to pull it from the set and add it to the other Hall of Fame rookie cards in my collection. 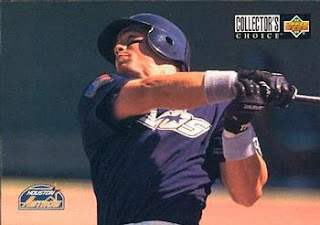 This is a great piece of photography! You can just tell the ball went far on this one! 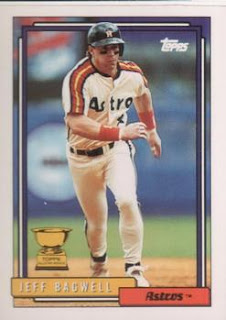 We'll end things off with a Topps All-Star Rookie Cup! I'm curious to see how many players with the cup went on to have Hall of Fame careers.

Congratulations Jeff Bagwell. You are truly one of the all time greats!
Posted by Matt at 4:05 PM