Paul from Paul's TTM Blog recently hit his 100th post, and decided to commemorate the occasion by changing his blog name. After inviting many good suggestions, he rechristened his blog "Scribbled Ink". (If you haven't already, go check it out!)

Paul was nice enough to send a thank you package out to those who offered suggestions. Even though my suggestion didn't get used, he sent along some good stuff:


Starting off with the non-card contents, Paul included some Brewers swag - a beaded necklace and a promotional DVD from the Brewers 2010 season. I actually looked up to see what kind of season this team had. For a 3rd place team, they had 3 guys reach 100 RBI! (Ryan Braun is the given, can you name the other two without looking it up? I'll reveal the answer at the end of this post.)


Paul also included some cards from the short-lived 2010 Topps Attax card game. The two Champions cards are promos. Not bad, even if they are Yankees! I never played the game personally. From reviews I have read, it was just an over-glorified version of the game War. 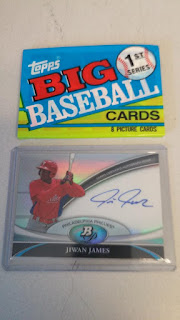 He also include an autographed card of former Phillies Prospect Jiwan James, and an unopened pack of 1990 Topps Big. I can make out the top card as former A's pitcher Rick Honeycutt, but I'll open the pack later to see who else I ended up with. 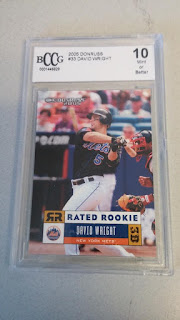 The highlight of the package was a mint graded 2005 Donruss David Wright Rated Rookie. This just happens to be my first graded card, which is pretty cool. Wright was on the fast track to Cooperstown before injuries derailed him. He seems like an easy guy to root for, so hopefully he can make it back someday.

Thanks again for the package Paul!

Everyone else, be sure to check out the new and improved Scribbled Ink at: https://scribbledinc.blogspot.com/ (Notice the web address uses a "c" and not a "k"!)