Like most baseball fans, I am saddened by the news of the tragic accident that claimed the life of former pitcher Roy Halladay. With the majority of his career as a member of the Blue Jays, he was a constant thorn in the side of the Boston Red Sox. I hated when my team had to face him! He commanded respect, however, and you knew you were watching one of the greats of the game.

Here are the Top 3 Roy Halladay cards in my collection: 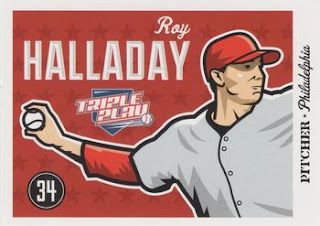 My initial plan was to do a Top 5 of cards I own. Unfortunately, Halladay pitched when I was not actively collecting. My choices were not the best. According to the TCDB, I actually have 7 cards featuring Halladay, but 1 is a League leaders cards he shares with 3 other players, one is a 2012 Topps Golden Giveaway Code card, and 3 come from the dreaded 2012 Panini Triple Play set (2 of them being *gag* puzzle cards). That leaves 2 decent cards, plus this one. Not the best representation for a player tribute. 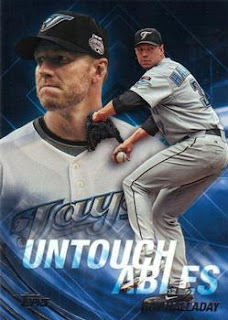 Fortunately, I happened to pick up this card recently with a pack of 2017 Topps Update I bought. Twenty career shutouts, including two no-hitters - yeah, that's the definition of untouchable. 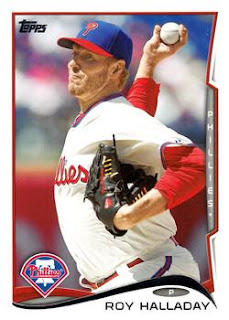 The lone base card I have of "Doc". Fittingly, it's his sunset card. If Topps wants to know why incomplete career stats are a bad thing, all they have to do is look at the sunset card of an All-time great. Wow, what a career!

Hopefully by the time he is inducted into the Hall of Fame, I'll acquire some more cards and do a proper Top 5. (I keep hearing he'll be on the 2019 ballot, but don't they make exceptions when a player dies before his 5 year waiting period is up? I thought they did that with Kirby Puckett.)