To The Victor Goes The Spoils

I like playing fantasy baseball. I've played the free version from Yahoo for 17 years, and I'll usually play 3 or 4 teams every year. This past year, I was in a league with other members of the Trading Card Database. We collectively agreed to send the leader at the All-Star break, as well as the overall season winner, a few cards as a prize. Although I was in the bottom half of a 15 team league at the All-Star break, I was lucky enough to pull close among the Top 4 for most of the 2nd half. As the season wound down to the final two weeks, I found myself in a dogfight for first with two other players. When the smoke cleared, I had won! It was easily one of the most fun leagues I had ever been in.

Anyway, I wasn't holding any other player to sending me cards. The competition was fun enough. Still, a few collectors reached out to me for my address. Recently, I received my first batch of cards from TCDB member Charlot. 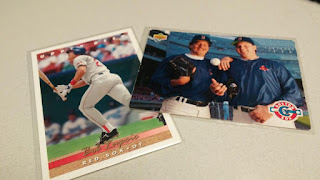 First, a couple of 1993 Upper Deck Red Sox cards. I love the Clemens/Viola card. I remember when Boston acquired Viola. I thought it gave them an amazing rotation.

Charlot is primarily a hockey card collector, and he was nice enough to send me a couple of cards of my favorite hockey team, the Buffalo Sabres. First off is former #1 draft pick Pierre Turgeon. 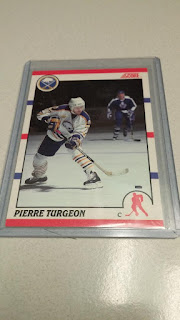 Here's the highlight of the batch - a vintage Sabres card from their first year of existence! I had to look up the unfamiliar Don Marshall - although he was only a Sabre for one season, he had a very good career, winning 5 Stanley Cups while playing with Montreal.

Thanks for the cards, Charlot!