I love hockey. It's my second favorite sport behind baseball. Despite this, I was never a collector of hockey cards. I appreciate them, I enjoy other bloggers writing about and sharing theirs, but when it came to my own personal collection, my focus was always on baseball. Here's my hockey collection as it stands now:

That's it - 47 cards. Most of them came from some packs I purchased on a whim last year, and a few came from a fantasy baseball win recently. But that's it - nothing noteworthy to say the least!

Until now, that is.

Billy from Cardboard History recently celebrated his milestone 500th post, and decided to hold a contest. I won, and as a result Billy generously stuffed a box full of hockey cards! 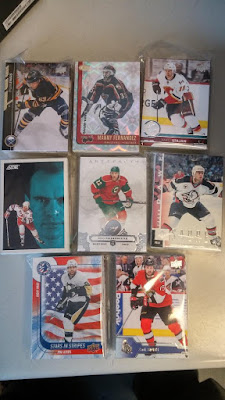 Each of these packs is stuffed with roughly 50 cards apiece in them. This is going to take awhile! So much so in fact that I think I can get quite a few blog posts out of them. Since there are eight packs, I'll devote a blog post for each one, going through and picking a handful of cardboard that catch my eye and stand out. At the end I'll compare my collection from this point and see how radically it's changed!

I'll start off today featuring one of the pack that has a Sabres player on the front: 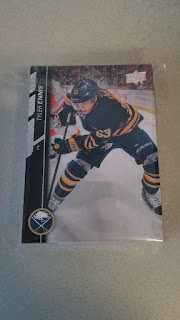 This pack had 47 cards in it - just like that, I've doubled the number of hockey cards I have!


The big name in Buffalo right now is Jack Eichel, but Sam Reinhart is a good young player I like as well. He has genuine talent, and I think he could be a star player.


This is just an awesome card. This is how I want all championship cards, across all sports, to be depicted. Win as a team, celebrate as a team.


I can't complain about a new Hall of Fame inductee!


I remember all the hype Molgilny had when he defected from Russia and came to play for the Sabres. He was a great player, even if he didn't turn out to be the legend we were all hoping for. It's very cool to have his rookie card.


There are some moments in history that you will never forget where you were when it happened. For Sabres fans, it's Clint's horrific injury. Ironically enough, just  a few days ago, his story was posted on the Players Tribune. You can't help but feel for the guy and everything he went through. The fact that he's taken his life experiences and is helping others is nothing short of heroic.

These are just some of the highlights! I can't wait to see what else in in store! Thanks again Billy!