Because of Tuesday's rainout, I got a rare opportunity to see my favorite team instead. We had awesome seats, beautiful weather, and a great game (outside of an absolutely ugly 6 run inning that cost the Red Sox the game).

Ed Smith Stadium in a beautiful stadium and considered one of the best fan experiences in Spring Training. A big reason is the staff. The one downside is that the stadium isn't the most conductive for autograph seekers. The players enter and exit the clubhouse near the dugout, so there is a limited opportunity when the players come out to stretch. I was able to snag a quick signature from 4th string catcher Dan Butler beforehand, but as the players stretched it was a tough go. The staff informed us we had 5 minutes before we had to return to our seats, and it looks like I would just get the one autograph. At the last moment, one more player came over, and in the mad rush of extended arms holding balls, cards, photos and pens, I got this great autograph: 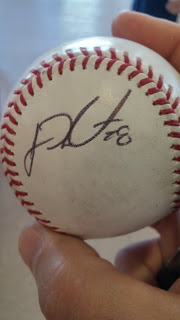 Boston's big off season signing J.D. Martinez! He was very nice and Made for a great final autograph for the week!
Posted by Matt at 11:08 AM