Paul is a frustrated Tigers fan. Paul runs the blog Scribbled Ink. Paul is also one of the more generous bloggers on the internet. Twice now I've entered contests he has run, and twice now I've lost. However, that hasn't stopped Paul from sending out participation prizes. His latest contest was a revenge fest against his spurned love. For suggesting a glitter bomb, I was gifted a very nice envelope!

This is what you get when the team's lone superstar backs out of the Fan-fest! Paul roughed up Miggy and knocked him back to his Florida Marlins days. He then proceeded to beat that Miggy up too! This special 1/1 card is sure to be one of the most sought after cards in my collection!


Paul kicked off the Red Sox portion of the program with some of Topps' latest offering. That team card is just happiness on cardboard! 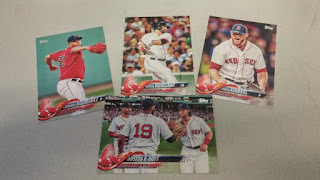 Paul also threw in some inserts of a couple of key players in Boston's World Series history. 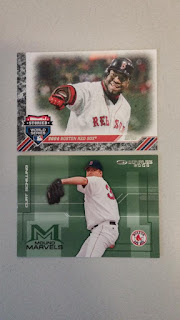 The real surprise of the package was not one, not two, but three relic cards featuring fan favorite Kevin Youkilis! Wow, that's some awesome stuff right there, Paul!


Thanks again, Paul. You are too kind! Anyone out there not following his blog? You should! Once your done here go check out Scribbled Ink! (Just don't piss him off! Right, Miggy?)
Posted by Matt at 10:00 AM