Happy Memorial Day! The NHL season has at long last reached its apex! The Stanley Cup Finals start tonight! What better way to celebrate than by showing off another batch of cards I won from Billy at Cardboard History! This pack contained mostly cards from the 2015-16 season, and there are great cards in here!


Lindholm scored his first career hat trick on March 8, 2015 against the Oilers. This card commemorates that achievement.


This is a great shot of Hemsky rejoicing while taking a seat on the ice. I'm guessing either he or someone he assisted scored.


This photo is amazing! Muzzin's jump perfectly frames the word Alberta on the board.You don't often think of hockey players getting that vertical during a game.


The leaning effect in this card makes this one stand out. It's like both players are just a breath away from toppling over.


A great action shot of one the all time great goalies. The card design is nice and simple too.


Another all-time great, what makes this card really stand out is the paragraph on the back: 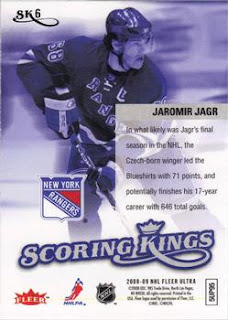 "In what likely was Jagr's final season in the NHL..." For anyone who doesn't follow hockey, Jagr played this past season for the Calgary Flames. Although Jagr didn't play for a few seasons after the 2007-08 season, he eventually made his way back to the NHL and played for a long time afterward. Fleer (and pretty much everyone else)  underestimated his career by a full decade! I get the feeling Jagr will still be lacing up his skates for some  Czech team well into his 60s!

As always, a big thank you to Billy for all the great cards!
Posted by Matt at 10:00 AM