I'm continuing my series of posts showing off the endless bounty of cards I received from Billy at Cardboard History! Another pack, this with a shiny goalie as the top card: 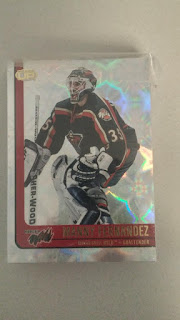 There's something is a little different about this pack... 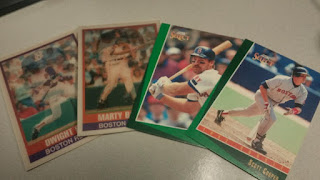 Hidden Red Sox! This was a pleasant surprise! Billy is a collector extraordinaire, but his focus is mainly on the NBA, NHL, and NASCAR. He obviously found a few baseball cards to pass along my way as well. Can't go wrong with a Hall of Famer, a Red Sox legend, a postseason hero, and a two-time All-Star!

On to the hockey portion of the pack! As usual, there are a lot of great cards that I've never seen before. I'll highlight a few...


As far as All-Star cards go, this one is pretty sharp looking. What makes it different is that it is actually a sticker! I wonder how many kids actually peeled these and stuck them somewhere.


I swear there is a guy somewhere in there! Is this the same Louisville that makes bats for baseball players?


This was a cool little fact card of the Sabres' team history. In the 18 years since, they've added 1 more appearance in the Stanley Cup Finals (1999), 1 Prince of Wales Trophy (1999), and 1 Presidents' Trophy (2007). Their Top Coach would now be Lindy Ruff, and Great Players would have to include names like Dominik Hasek and Pat LaFontaine.


Eic Lindros was the Connor McDavid of my childhood - a player of such extraordinary talent. This is a cool card from his sophomore season.


Foil on cards can be very hit or miss. I think gold foil with the dark blue and black banner looks great! I think I have a few baseball cards with this same design.


I'd be remiss if I didn't acknowledge this great oddball card of the current Stanley Cup champ and Conn Smythe winner Alex Ovechkin!


I'll finish this up with a great action shot of Evgeni Malkin celebrating. Kudos to the photographer!

As always, my sincere gratitude to Billy for his generous package!
Posted by Matt at 10:00 AM