Last Friday, MLB released the ballots for this year's All-Star Game. (Count me as one of the fans grateful they did this later in the year, as opposed to early May.) As a Red Sox fan, I have a good guess who will represent Boston: Mookie Betts and J.D. Martinez are locks, Chris Sale and Craig Kimbrell are very likely, with Xander Bogaerts and Andrew Benintendi having outside shots to crack a strong field of contenders. One name that didn't enter my mind: Mitch Moreland.

If you're not familiar with "Mitchy Two-Bags" I don't blame you. He's always been one of those solid but not spectacular professional ballplayer types. His main claim to fame is a Gold Glove award with the Rangers in 2016. For most of this year he's been platooning with since departed Hanley Ramierez at first base. He's just starting to get full time at-bats this season. He's easy to overlook.

As per usual for this time of year, many writers are sharing their ballots, and Moreland is showing up on a lot of them:

These 10 Players Could Be First Time All-Stars


Daily Red Sox Links: Mitch Moreland Gets His Game On

And you know something? They're right! Even in a part-time role for most of the first couple months, Moreland has been one of the best options at first base. I honestly didn't realize how weak the AL was at first this year. The only other real option is Chicago's Jose Abreu, but look at the numbers (as of 06/07/18):

Almost identical, wouldn't you agree? But Moreland has put up those numbers with almost 80 less at bats than Abreu! That's roughly 2 weeks worth of games! I'm convinced, Moreland not only deserves All-Star recognition, but he deserves to start!


My All Star Ballot 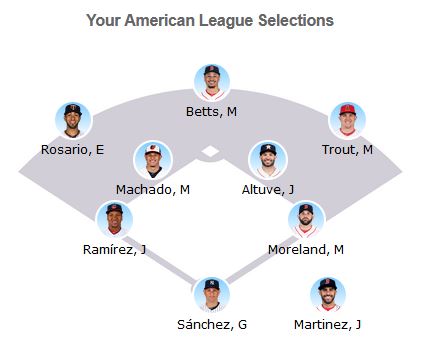 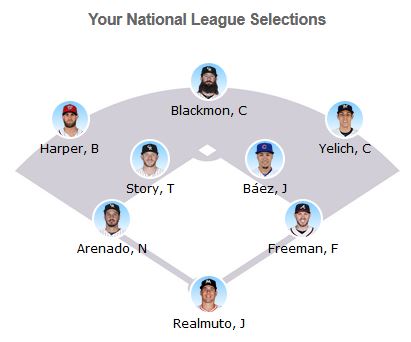 The only ones I had to think about was Rosario over Judge (No way Judge won't win, but anyone that strikes out 8 times in a double-header really shouldn't be a lock for anything!), and Yelich over Kemp. Otherwise, I'm quite happy with my ballot!
Posted by Matt at 10:00 AM