Bruce Bochte was a fan of vintage photographs. Whenever his family went to a theme park, he'd always drag the wife and kids to get an old sepia-toned photograph of them dressed like an Old West frontier family. When he saw the ad in the paper looking for volunteers to recreate the 1982 New York Giants, he just knew he had to be a part of it!

The studio was in a once thought abandoned building just outside of town. No sooner had he walked through the doors then he was whisked to a dressing room to get fitted with an authentic vintage outfit. Bochte couldn't help think of how well crafted the clothing was - it was almost like it was really from the late 1800s!

As he stood on the platform with his "teammates", Bruce noticed that there was a lot of computers and strange equipment behind the camera set-up. Men in lab coats stared back at him with anticipation. Something's not right here, he thought.

The man with the camera smiled. "I don't really follow baseball, so forgive me if I mess up the terminology. After many strikeouts, I think we're ready to finally score a goal. Say hello to Phil Rizzuto for me!"

The flash of the camera was the last thing Bruce Bochte remembered.

The bad news: No one wanted the Rickey Henderson or Art MaHaffey cards, so their time traveling has come to an end.

The good news: As you can tell by the above story, I was able to get a new trade in! Doe from the blog Now and Zen, who previously sent me the set of 1986 Topps Pete Rose tribute cards, reached out to me requesting the card of the 1982 New York Giants. He offered me my choice from four 1980 Topps, and my return package just came in on Friday: 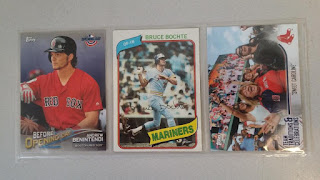 As you can see, in addition to the card of 1979 All-Star (It's true!) Bruce Bochte, Doe also sent along a couple of Red Sox inserts from this year's Opening Day set. It's good to have some fresh faces for the trade stack again! Thanks Doe!

Since it's been awhile, I'll recap the project: I started out with a pack of 2018 Topps Series One baseball cards, and have traded every card in that pack away for something older. The primary focus is to keep trading cards and getting an older card in return. The name doesn't matter, the condition doesn't matter. I just want to see how far back in time I can go!

Make me an offer on any of the cards below! You can comment on this post, or initiate a trade through the Trading Card Database (Member Name: Kep75). Help me keep this project going!