I was wasting time on the TCDB and figured I'd see if I can unload some base set doubles I had to someone that wanted them. This led me to a collector named Seth, and it turns out he happened to have a 2018 gold parallel I needed for my Golden Sox project! I put together a little package of base cards and inserts for him, which he accepted! 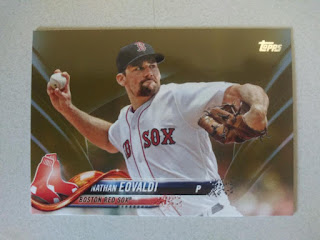 Eovaldi had a fantastic postseason for the Red Sox. He was the winning pitcher in both the 16-1 drubbing of the Yankees during Game 3 of the ALDS, as well as the 8-2 victory over Astros in Game 3 of the ALCS. However, he will forever live in Boston lore for his gutsy performance in Game 3 of the World Series. Scheduled to start Game 4, he instead came on in the 12 inning of the tie game and proceeded to throw 97 pitches all the way through to the 18th inning walk-off by Max Muncy. Despite taking the loss, he received a standing ovation from his teammates and was a key inspirational boost towards their World Series win.

Seth also graciously gave me a few other cards I needed: 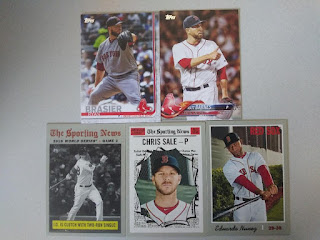 Thanks for the trade Seth!

My little project to collect all the gold parallels of the 2018 Red Sox is picking up a little steam! 3 down, 28 to go! If anyone has any they are willing to trade, let me know! You can check out this list on my Golden Sox Project page!
Posted by Matt at 10:00 AM