Way back in May, Jon from A Penny Sleeve For Your Thoughts held a Free Stuff Friday overflowing with awesome cards. I, of course, claimed any unwanted Red Sox cards for my collection, and boy did I claim some beauties! 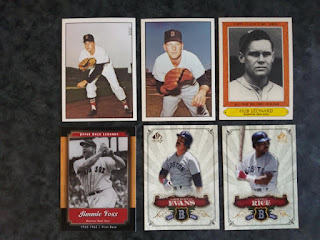 Every Red Sox fan know names like Foxx, Rice, and Evans. Even Hub Leonard is a name that'll ring a few bells. But those two cards from the 1978 TCMA The 1960's set feature names I had never heard of before. Bill Spanswick? Arnold Earley?
That's what makes baseball card collecting fun, isn't it? I took a few minutes a researched these men.
Spanswick only managed one season in the Majors, but still had some amazing professional moments. In the minors, he once struck out 22 players in a 9-inning game, and 25 batters during a 14-innibg shutout!  He's still involved in the sport, acting as an usher for Spring Training games at the Red Sox site in Fort Myers.
Early pitched a robust 8 seasons in the Majors. He made his major league debut the day before Ted Williams hit a home run in his final at bat. After a career pitching for the Red Sox, Cubs, and Astros, Early became a sheriff's deputy in Flint, MI.
They may not be household names, but history remembers them anyway.
Thanks for the cards, Jon!
Favorite cards: Gee, after all that research, I have to give the honor to Early and Spanswick don't I?
Posted by Matt at 10:00 AM