Yesterday I highlighted a small TCDB trade with a guy name John. Even though the cards I previously showed off were great in their own way, the key card from the proposal was this latest addition to my Golden Sox Project: 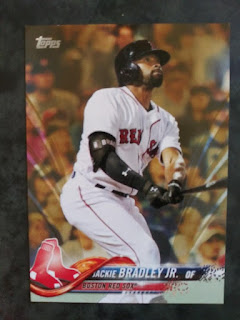 Jackie is hands down the best defensive outfielder I've ever seen play for the Red Sox. Offensively, he has a reputation of being very hot or cold. When he's hot, he's the kind of player that can carry the team. A perfect example of this was the 2018 postseason. Bradley won the ALCS MVP award despite only having 3 hits that series. Each of those hits however were big hits that helped the Red Sox defeat the Astros in 3 different games:
I don't see the Red Sox spending much this off-season, but I hope they find a way to bring Jackie back. The incredible catches he makes are worth watching games for alone!
Jackie Bradley Jr. is the 7th card acquired for this project, leaving me with 24 cards remaining!
Posted by Matt at 10:00 AM