Happy New Year! Welcome to the Year 2020 Update Series! (Hopefully not, but would anyone be really surprised?) I'm still catching up on trades from last year, and today I'm highlighting cards from a TCDB member named Edward. I showed off a separate trade with Edward earlier this month when he participated in my Time Travel Trading Project. This trade is your more standard modern collection of cards. 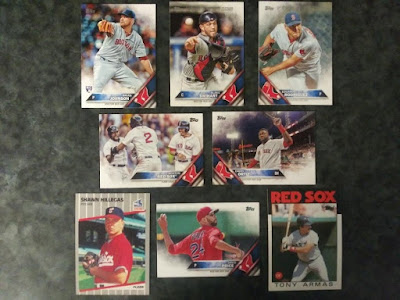 2016 was the year I really got back into card collecting. I was missing most of the Series 2 Red Sox because most of my money was going to Archives, a set I really enjoyed that year. The 1989 Fleer was an upgrade to what was currently in my complete set, and the Tony Armas represents the last Red Sox card I needed from the 1986 set.
Favorite Card: A classy hat tip to David Ortiz!
Thanks again for the trade Edward!
Posted by Matt at 10:00 AM