I'm still playing catch-up, but I wanted to get this tribute in before it got lost in the shuffle. 2020 decided to take one last Hall of Famer when knuckleballer Phil Niekro passed away the day after Christmas.  As I have done way too many times these past few months, I offer my tribute of the Top 5 favorite cards in my collection: 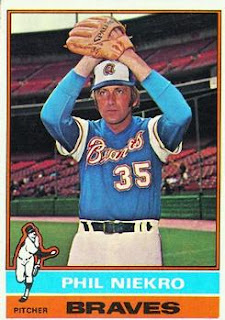 This is the oldest card I have of his. Who doesn't love those 70's Braves uniforms? 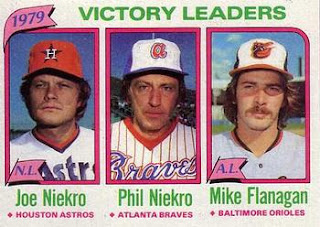 I was 4 years old in 1979, so I have no idea how this unusual sibling rivalry played out. It's one of those little baseball quirks that two brothers tied for the NL lead in wins. I can only imagine what the phone conversations between the Niekro brothers must have sounded like. Fittingly, Phil and Joe would go on to have the most career wins by a pair of brothers in MLB history. 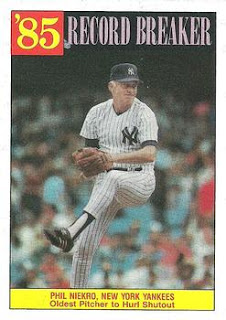 As much as I don't want to highlight a Yankees card, this record deserves recognition. Any time a player gets mentioned in the same breath as Satchel Paige, you know they must have done something noteworthy! (Coincidentally, I must add that he was 46 in this picture. I'll turn 46 this year, and it does my ego good to know I don't look anywhere as aged as Niekro does!) 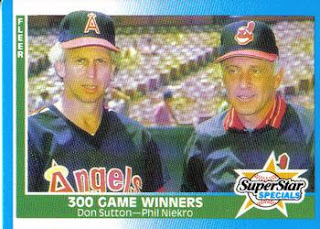 I don't know how many times in MLB history a pair of 300-game winners faced each other in a game, but Fleer decided to highlight a game in June of 1986 between recent milestone-reachers Niekro and Don Sutton. Both pitched well, but neither got a decision in the game. 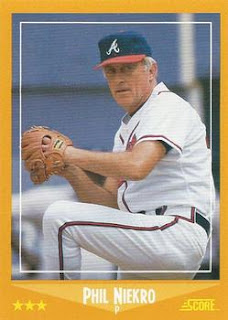 How could I not end this tribute with this glorious sunset card? Niekro was born on April 1st, which made him an ideal candidate for a blog prank I coordinated last year. For one day, 25 bloggers showed off this final tribute to one of baseball's greats.
R.I.P Mr. Niekro, and thanks for the memories.
Posted by Matt at 10:00 AM