Two rambling posts in one month...I must be struggling for content....
Topps recently released the design for next year's base set. 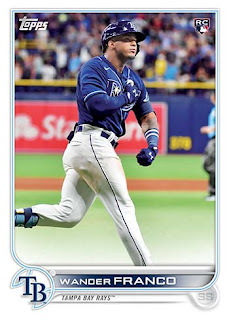 My first thing I thought of was a wrench, so I think I'm going to refer this as "the wrench set". Feel free to use that term and help it catch on. ;) 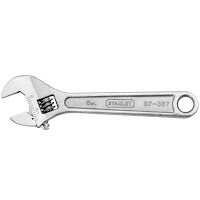 Other than that, it's not horrible. Borders are always good, readable names are very good, and a baseball on a baseball card is just as the sports card gods intended.  It's not the best design they've done recently, but easily the best in a few years.
********************
If you aren't signed up to the Baseball Hall Of Fame mailing list, you're missing out on some cool stuff. Recently I learned of one the most improbable individual games in history. Who else but Rickey Henderson could score 4 runs and steal 5 bases in a game, all without getting an official at-bat?
********************
As someone who roots for a team named after colorful footwear, I really can't have a strong opinion about what other teams want to call themselves. I'll admit I first thought Guardians was an odd choice for Cleveland's new name, but that was before I read about the landmarks the name is based on. I'm cool with it, but I can't help but think the team almost has to be built on pitching and defense now. 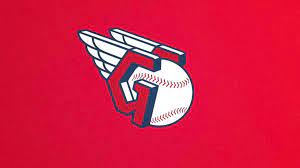 I also can't help but think Disney/Marvel had a hand in this. Besides the obvious Guardians Of The Galaxy tie-in (Applause to those who have suggested Rocket and Groot as team mascots by the way), that logo reminds me of Thor's helmet. Personally, I will be disappointed if they don't play this clip on the giant scoreboard every time someone makes a leaping grab:

********************
Blog Bat-A-Round idea: Rename every team. It's harder than you'd think. I tried and here's what I came up with:
AL EAST
Baltimore Chops
Boston Splinters
New York Babes
Tampa Bay Beaches
Toronto Buffaloes
AL CENTRAL
Chicago Deep Dish
Cleveland Rocks
Detroit Motors
Kansas City Ribs
Minnesota Pucketts
AL WEST
Houston Bangers (couldn't resist!)
Los Angeles Trouts
Oakland Redwoods
Seattle Frappachinos
Texas Texans
NL EAST
Atlanta Hammers
Miami Sound Machine
New York Cabbies
Philadelphia Cheesesteaks
Washington Monuments
NL CENTRAL
Chicago Banks
Cincinati Roses
Milwaukee Fonzies
Pittsburgh Yinzers
St Louis Arches
NL WEST
Arizona Cacti
Colorado Oysters
Los Angeles Jackies
San Diego Admirals
San Francisco Trolleys
Yeah, lots of bad puns and nicknames based off of team legends. Give it a go, if nothing else it should be good for some laughs. Honestly, I think if Atlanta ever feels like they have to change the Braves name, Hammers would be an awesome choice.
********************
Last minute edit! - Kyle Schwarber, welcome to the Red Sox! Not sure where he's going to play, but it's a good start and I hope there will be more deals before today's deadline!
Have a good weekend everyone! Mine will be busy. I have my parents coming in for my daughter's First Communion, and then I've taken next week off from work so I can do a bunch of maintenance projects around the house.
Posted by Matt at 10:00 AM