Last week, I wrote about my trip to the Factory Antique Mall, where I picked up some unopened packs of 1992 O-Pee-Chee. I thought it would be fun to open two of those packs and have a good old fashioned pack war to see which pack was better.
It's all about star power, so I'll award 1 point for every All-Star Game nod a player gets, plus additional points for the major awards (MVP, CY, ROY) and for a Hall of Fame player. Add a point for every Red Sox card, and subtract a point for every Yankee that makes an appearance!
Since these are OPC packs, I thought it'd be fun to add some extra "Canadian" points! One point will be awarded to a card for every:
Easy enough, right? Which pack will reign supreme? 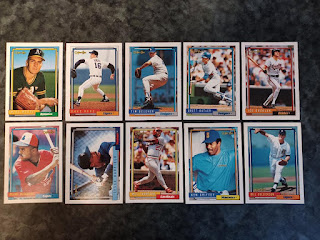 Mike Moore - 1 point (All-Star)
Tim Belcher - 1 point (Now With)
Brett Butler - 1 point (All-Star)
Delino DeShields - 1 point (Expos)
Jesse Barfield - 0 points (All-Star, but on the Yankees)
Ken Griffey - 3 points (3x All-Star)
Dave Haas, Joe Orsulak, Milt Thompson, and Bill Gullickson - 0 points
Technically, 6 out of the 10 cards in this pack scored points, for a total of 7 points. Ken Griffey Sr. is the star card here, as the only player to make multiple All-Star teams. Ironically, Jesse Barfield is best remembered for his time with the Blue Jays, but suffers for ending his career as a Yankee.
7 points seems like a fairly easy point total to surpass. Can our second pack do it? 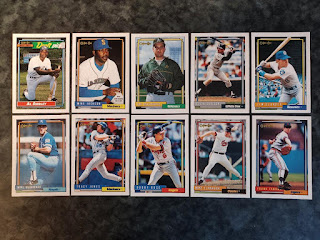