I have a confession to make. At least once a year, I take mental health day away from, well, everything. I pick a day ahead of time and take it off from work. I don't tell them why. I also don't tell my wife, or any other family and friends. I play it off like it's a normal day. I get up at my usual time, get dressed and ready for work, take the kids to school, all that jazz. But when it comes time to leave for work, I spend the next 9 hours doing something else, whatever I feel like. I come home at my regular time, feeling completely refreshed and ready to take on my day-to-day responsibilities.
Why am I telling you this? Well, I found cards on my last day off, leading me to the most I ever paid for a card in probably 30 years! Stay tuned!
The Monday I took off wasn't one of my typical mornings. My parents had come down from NY for a weekend visit, and were leaving that morning. They arrived before I had to take my two oldest daughters to school, and although it was to say goodbye, I was happy to start my day seeing their faces. Afterwards it was typical morning, and once my wife left to drop off the two youngest daughters to her mom's and head to work, I was free! 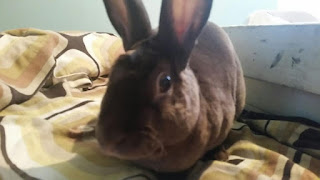 Well, not entirely free. There was one bit of adulting I had to do that morning. I had to go to the vet and pick up the cremated remains of our pet rabbit, Ginger, who passed away at the beginning of the month. That sucked, but thanks to my twisted sense of humor I decided Ginger would be my travel companion on my off day.
First order of the day: breakfast. I'm just going to say it: Burger King's breakfast sandwiches are better than McDonalds. After hitting the drive through, I went to the local park, sat at an empty pavilion and enjoyed the scenery while I ate. It was a beautiful morning, the sound of the river was peaceful, and I even got to watch a new family of geese near by. A great start! 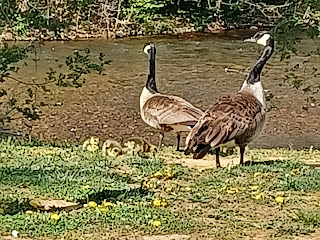 Now, the rest of the day called for brutal weather in the mid to high 80's, so I wanted to spend my day somewhere indoors. Ever since I moved to Virginia, there was one place I've always wanted to go, and today was the ideal day to finally do it. After breakfast, Ginger and I drove for 30 minutes until we reached the Factory Antique Mall in Verona, billed as the largest antique mall in America. (I don't know how true that is, but the place is huge!)
There was something for everyone, and I easily spent the whole day there just walking around looking at everything. I wasn't expecting to find cards, but I was hoping to find something sports related at least. To my surprise, there were a couple of booths dedicated to sports cards and collectables! It turns out the same guy owned both spots, but he didn't have a card shop locally. He just sold from the antique mall. I found some good cheap cards there.
He had an assortment of unopened packs. I was endlessly amused at finding O-Pee-Chee down this way, so I picked up four packs at $1.50 each, along with four $1 packs of Stadium Club. 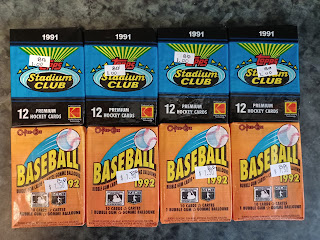 It wasn't until after I left that I realized the Stadium Club was hockey and not baseball. Oh well! I'll get a blog post out of them at least! 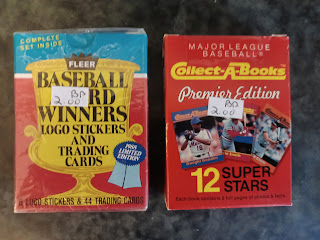 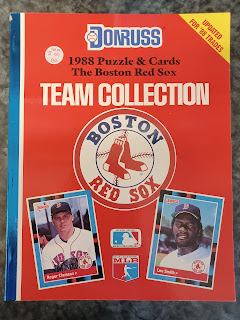 I also picked up a couple of small box sets and a book containing all the Red Sox cards from 1988 Donruss, including some updated ones that were never issued in packs! (According to the TCDB, these count as cards, so I guess this is another completed set!) 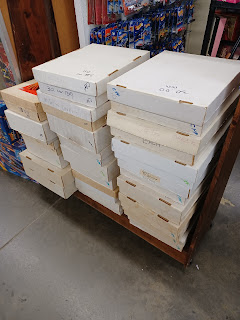 I did start to get a little excited when I saw a bunch of card boxes in one little discrete corner. But upon further inspection, I quickly passed. Cards with mildew? No thanks! 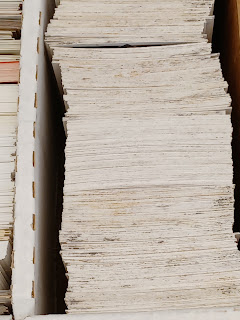 All of my purchases came to $19 - not a bad haul if I do say so!
Here's the beauty of antique malls - sometimes, if you look hard enough, you'll find the unexpected! As I was strolling down the aisles checking out the various booths, something caught my eye... 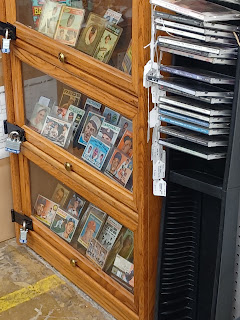 Are those cards? A closer look revealed a fantastic discovery! 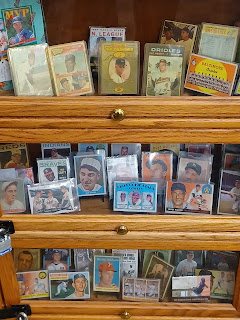 Yes! Locked up in a case was an assortment of mostly vintage cards. Whoever owned the booth obviously didn't specialize in the hobby, but knew they had value. They provided a sheet listing each card and their price. There was one Red Sox card there, and it called to me: 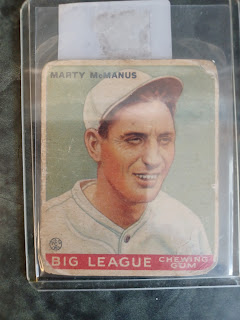 A quick Google search showed me that the $20 asking price for this 1933 Goudey was good given the condition it was in. I freed Marty McManus from his locked cabinet, and he's home with me now. The twenty I spent was more than all the other cards I got that day, and the most I ever spent on one card since I was a card show regular in my teenage years.
The day about done, with cards in tow, Ginger and I headed home. (Well there was one more stop at the local Dairy Queen for a 'smores milkshake!) It was a good day, and everything I hoped a day off would be!
One last photo to share before we go, not card related but very cool nonetheless. If I ever have a few hundred dollars floating around ready to be needlessly spent, I'm going back to the antique mall for this:
"Can I refill your eggnog for you? Get you something to eat? Drive you out to the middle of nowhere and leave you for dead?"