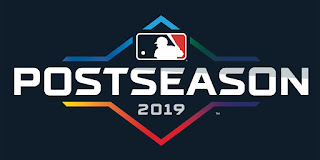 From the field of 10, we are down to four. The Brewers, Athletics, Twins, Braves, Dodgers and Rays have fallen in baseball's grand battle royal.  We are left with the cream of the 2019 baseball season, and from this we shall determine our final two warriors. Who will be left standing as the AL and NL Champions? I'll offer up some quick thoughts, along with my series prediction. Plus, since there always seems to be a non-superstar type that steps up and has a great series, I'll try to predict a non-obvious player to win MVP.

Before the playoff began, I predicted the Astros would square off against the Yankees in the ALCS. The Yankees made disappointingly quick work of the Twins, sweeping the series 3-0. (Seriously Twins - Where did all that home run power go?) Meanwhile, the Astros looked like they were going to make equally quick work of the the Rays, but those pesky Tampa Bay guys forced this series to go the full 5 games. In the end, the Astros ultimately prevailed, as I and most others expected. They'll go on to the Championship Series for the 3rd straight year and hopefully send the Yankees home empty-handed.


Prediction: Astros in 7
Completely Out-Of-Nowhere ALCS MVP: Yuri Gurriel. Did you know he hit over 30 home runs and had over 100 RBI this season? Funny how a good player can sneak up on you like that.

Here, I was expecting the Braves to square off against the 2-time defending champions, the Dodgers. I bet a lot of people were thinking that. The Cardinals won a NLDS for the ages while the Nationals ruined about 3/4 of the bracket challenges out there. These two teams seem to match up really well, and I expect this to be a great series.


Prediction: Nationals in 6
Completely Out-Of-Nowhere NLCS MVP: Ryan Zimmerman. In what could be his final season, "Mr. National" will lead Washington to the promised land. You couldn't write a better story.

Let the next round of playoffs commence! Here's hoping for two close and exciting series!