I've been doing a bit more trading this summer on the TCDB. So much so that I've gotten into a bit of a backlog when it comes to showing the cards I get. I could just throw them all together and summarize in one big post, but I'd really like to give each trade partner proper due. In order to thin up the draft folder, I'm hereby designating Thursdays as trade recap days! I'll have a trade recap each week until I'm caught up. I'm going to try to keep my usual M/W/F posting schedule as well, but we'll see how it goes.

If you are a regular reader of my Time Travel Trading posts, you may remember from the last update that I pulled two cards from the stack so that I could make a trade that wasn't going to be a part of the project.

A TCDB member named Tony offered two cards on my want list, and wanted some vintage I had on my trade list in return. I felt it was a fair trade, so I accepted. These are the two cards I acquired: 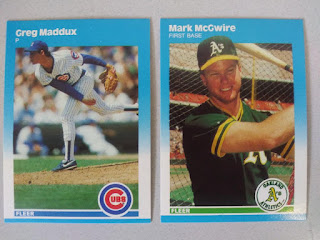 Earlier in the year, I had won a contest from ARPSmith's Sportscard Obsession. As a bonus to the actual prize, Adam graciously included an almost complete set of 1987 Fleer Update. These two cards were the only ones missing, and now this set whole again!