Johnny (Johnny's Trading Spot) has been giving away cards like a man possessed. He posts, we comment, he randomly picks and someone wins 9 cards. It's hard not to comment on his posts too - he shows off some great cards, and I think he has introduced me to more sets I had never seen before than anyone else. Without really even trying, I was the lucky winner 3 times already!
The first prize pack included 5 cards featuring Hall of Famers, including 2 of Red Sox legend Bobby Doerr (Cabrera will someday be the 6th). Throw in a couple of solid hitters in Gonzalez and Staunton, plus a nice vintage card of former MVP/Cy Young winner Vida Blue, and you get one happy blogger! 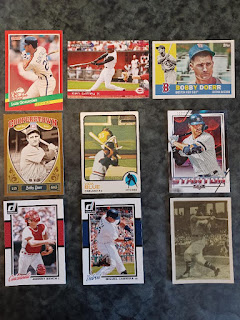 Favorite Card: Every time I see that Panini Cooperstown set, I like it more and more, but I have to go with the awesome 1973 Vida Blue here!
The next PWE of cards included another 70's card, more Hall of Famers and some very nice modern cards. I will never turn down a Raffy rookie! 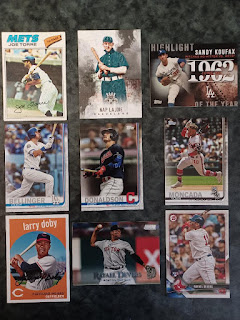 Favorite Card: I'm tempted to go vintage again here, but I can't deny the sharp photography of Stadium Club!
My latest winnings from Johnny hit me with a trio of Gypsy Queen Red Sox, along with some of the greatest hitters in the game. 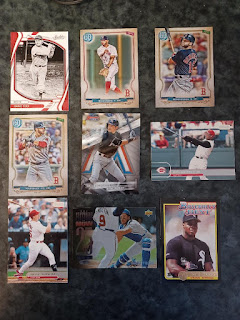 Favorite Card: Love me some fun food issue cards, so the Big Hurt wins this round.
Thanks for the cards Johnny!