An Assortment Of Acquired Cards

It's photo dump time!
I try plan out my posts a few weeks ahead in advance. I also try to show off most of the cards I have coming in. Sometimes when I have a lot to show off, I can have a full month of posts planned out. Sometimes, even that's not enough time to show off everything. I find myself running the risk having cards I want to show off, but haven't had time to dedicate separate post for. So today I'm going to show off a bunch of cards I've acquired in the past few month:
We'll start with photos of cards that have been sitting in my file folder the longest. Way back in the Spring, I played hooky from work and went to an antique mall. Among my purchases were 4 packs of 1991-92 Stadium Club hockey cards. My original plan was to make a couple of pack war posts to show them off. However, my enthusiasm for the idea diminished once I opened the packs. It doesn't help when half of one pack is almost an exact card-for-card match with one of the other packs, while the other half matches another pack completely! I was not anticipating such bad collation and essentially getting a full pack of doubles killed the deal. Anyway, I still took photos of the cards:

In my efforts to whittle down my list of Red Sox needs, I picked up two lots off eBay - one for a bunch of 1975 cards and another for 1976. My goal is to have the list under 300 cards be the end of the year, and these two lots provided a nice boost towards that goal:

To my knowledge, I am not related to Bob Keppel. He is however the only person with my last name to have appeared in the Major Leagues. I picked these two cards up in a TCDB trade with Mark Z along with some cards for the Time Travel Trading project. With these 2 cards, I am now tied for #35 on the TCDB, 2 cards away from joining the Top 10 and 11 cards from having the #1 spot all to myself. It won't be easy (He only has 95 cards, half of which are serial numbered, while the rest are mostly Minor and Japanese League issues), but I think I need to make this a goal. The #1 spot will be mine! 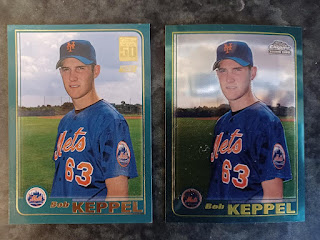 Everyone else showed off their rock and roll custom from Greg (Nine Pockets) weeks ago, but I haven't, until now. His Battle of The Bands posts were some of the most entertaining that I've read in awhile, and when it was done he gave away some customs of the various participating bands. Surprisingly, I think I was the only one to request the winning band, the great Led Zeppelin!

Greg (Night Owl Cards) included a bonus cards for me in one of our recent Time Travel Trades. One less '75 Red Sox to chase down! Thanks Greg! 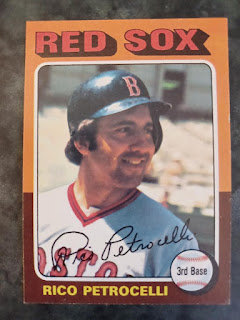 Finally, I'm familiar with Topps Magazine, but did any one else know that they also produced a line of kids books? I was in a local used book store earlier this summer and came across this book. I didn't buy it, but I thought it was interesting. Of course, the story centered around a  kid's lucky card. The book even included "cards" to collect! 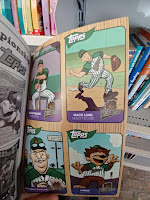 Whew! That cleared out the 'ol photo folder! To think, even with all this, I still have most of October mapped out...

One last thing before we wrap this post up. Regular reader of the blog Collecting Cutch know that October is Breast Cancer Awareness month, and his annual month-long Save Second Base posts were always worth looking forward to. Unfortunately, this year Brian has announced that he won't be able to put forth the extravaganza we've come to expect. I kind of feel this is an opportunity for his friends and fellow bloggers to pick him up and raise and promote a worthy cause in his absence. I'm challenging all of you bloggers to do something, anything, this month for Breast Cancer Awareness month. I've decided that every post of mine this month will include a pink ribbon.
As an added bonus, there is also a link to The Breast Cancer Site at GreaterGood.com. Click on the button there and they'll donate a free life-saving mammogram. It's a free and easy way to help support others!
Posted by Matt at 10:00 AM