The baseball world lost Hall of Fame Reliever Bruce Sutter on October 13th. In honor of his extraordinary career, I would like to present my Top 5 favorite Bruce Sutter cards that I own. 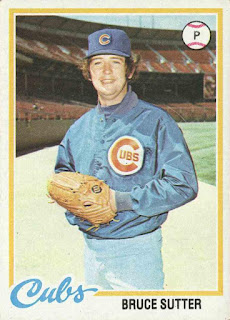 This is the earliest card I own of Sutter. On the back, it mentions that his best pitch is his forkball. Sutter was consider a pioneer of the split-fingered fastball, an offshoot of the mostly-forgotten forkball. (If you're curious about the difference, I found an excellent article here: https://littleballparks.com/splitter-vs-forkball/) 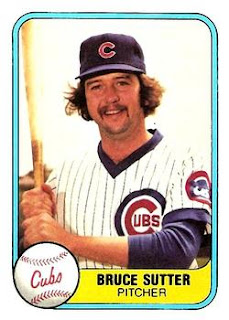 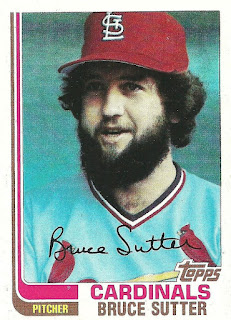 Bruce won his only Championship with the Cardinals in 1982. (Random thought: With Jim Kaats' introduction earlier this year, has there been any other team to feature 2 Hall of Famers in their bullpen?) 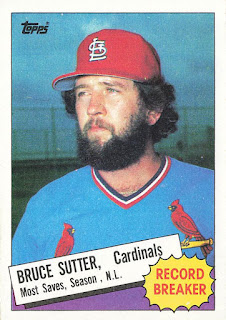 My how the times have changed! Since this record breaking season by Sutter, the 45 saves mark has been reached 71 more times! 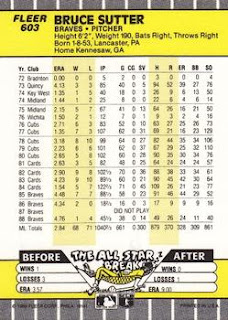 I'm showing off the back because Fleer gave Bruce Sutter a true sunset card, complete with even his minor league stats! Not many Hall of Famers get that on their final cards!
Bruce Sutter was the first true Hall of Fame reliever, becoming the first pitcher inducted without ever making a start. From 1979 - 1984 he lead the NL in saves 5 times, and either got the save or the win in three straight All-Star games (1979-1981). RIP, Mr. Sutter, you will be missed.