This is an exciting update. History has been made - not once, but twice! I've got 5 trades to show off this month, and two of them are guaranteed to make you do a double-take. Let's dive in!
Our first trade comes courtesy from a blog reader named Ken. I showed off his first Time Travel Trade last month, and it didn't take him long to come back for a second trade. Thanks to him, there's more vintage (and a couple of vintage-inspired modern cards too).


Even after all this time, it still amazes me that I am trading for cards from the 50's and 60's on a regular basis. Before this project began, I don't think I ever traded away a card older than me. Now I'm sending out old cardboard every month. Unreal.
Over the past year, Brendan (The View From The Third Floor) has become one of my most frequent trading partners. This latest package from him was one that I'll never forget:
Your eyes do not deceive you - for the first time in Time Travel Trading history, there is a certified autograph in the stack. It's even serial numbered to just 800 copies! This opens up a potential Pandora's Box of possibilities. What kind of return can I possible expect for this card? Do I hold out for another auto? Do I expect a big return even though the player isn't a big name? I really don't know. We'll see when an offer comes in I guess. The other cards are welcome additions too. That grey blotch is actually  an oddball Chuck Knoblauch. Here's a better look at it: 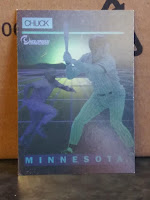 US History enthusiasts, rejoice! Thanks to Jon (A Penny Sleeve For Your Thoughts), the first card of a former president has graced its way into our stack. I personally don't know much about these cards, although I remember seeing them before, a long time ago.
That sweet Robin Yount card found a new home with TCDB member Abraham, who passed along another 2021 card along with one of my favorite players:

It wouldn't be an update without a trade with Bo (Baseball Cards Come To Life!). He just keeps trading and trading - 14 Time Travel Trades so far by my count! This batch of cards includes some Bowman:

Some junk wax era goodness:
Football cards (Shout out to the original Goonie John Matuszak!):
Plus some vintage baseball of course!

I had an idea to wring some extra posts out the Time Travel Trading project. Last month I gave a detailed look at the trades that netted me the oldest card in the stack -  a nice Hurricane Warning card. Shortly after, Billy (Cardboard History) commented that he could trade me an older card for it. True to his blog name, Billy made history as well in the annals of Time Travel Trading with a card that hails from the 1800's!
Billy didn't have much info on this card, and it doesn't even show up in the TCDB! Fortunately, a little research led to a graded copy on eBay, letting me know this is a 1890 Sweet Caporal Actors & Actresses card of young silent film actress Frankie Raymond. I know I've said this before, only to be proven wrong time and again, but this card will probably reign as the oldest card in the stack forever. I can't fathom seeing an older card in my mailbox ever.
Thanks again Ken, Jon, Abraham, Bo and Billy! I'm so excited to be able to offer all these new cards. As always, this project is fueled by trades, so if you see something you like, all it takes is a card older than what I'm sending out! There's over 300 cards here - something for everyone!